Don't Know What To Say

Great! You came to look at my short interview with Joe Simpson, about his relationship with his father.


What I’m writing about here is very important.

As important as it gets.

But there’s quite a bit more. You might want to get a cup of tea…

Ready? Then let me tell you what happened at the mosque…

We wandered over. There was a bit of suspicion: what were these two white guys doing? I introduced myself, said I was from the Financial Times. I left him to introduce himself.

He said he was a councillor…

And they invited us inside.

We looked around a little, noticed all the shoes on the floor, people washing their hands and faces…

Not exactly a Hollywood ending. He didn’t tear up his BNP membership card. “The Asians” didn’t carry him down the street on their shoulders…

And that’s OK. It was good to see him, nodding modestly and smiling, as he was treated like a guest by these people he’d despised.

I don’t know exactly what he made of it, but I’m pretty sure it had some kind of impact.

The thing I want to draw your attention to is this: conversations like that don’t just happen.

They have to be engineered.

Which reminds me of one of my heroes, Studs Terkel.

Terkel was a legendary journalist who used to talk to ordinary people on the street, on buses – anywhere – to capture stories that would otherwise never be heard. 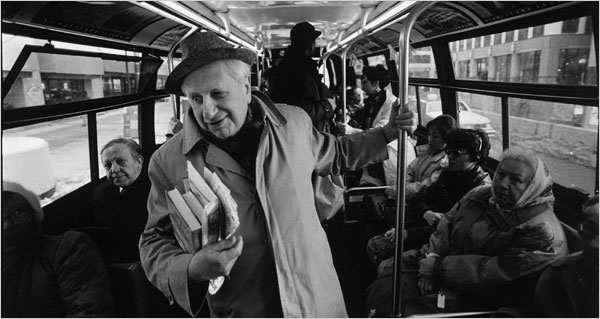 Terkel, on a bus


I’m a big fan. If you get the chance, you should read Terkel’s book Working, about the extraordinary experiences people have, just doing ordinary jobs.

The best version of the book is the one that was turned into a comic. I’m a big fan of comics, too…

But I’ll tell you about that another time.

The key thing is, he found out the reality of people’s lives by the simple means of talking to them…

Giving them a chance to be heard…

It takes skill, to launch into that kind of conversation.

I mean, just imagine starting a chat with somebody on a bus. Getting out your microphone…

While they’re thinking: Who is this character? How can I escape?!!

If you haven’t done it before, you might need help.

Terkel did it a lot. He had practice.

As a result, the people who talked to him tended to feel pretty good about it afterwards.

They’d got something off their chest – something they probably didn’t often get the chance to say.

I know myself how powerful that is, because I once spent just five minutes talking to somebody about something, and those five minutes changed my life.

I’ll tell you about it some time.

But right now, you may be wondering what any of this has to do with you…

I’m coming to that. It’ll soon be clear.

I’d love to hear your story. It won’t appear on Facebook (unless you choose that option).